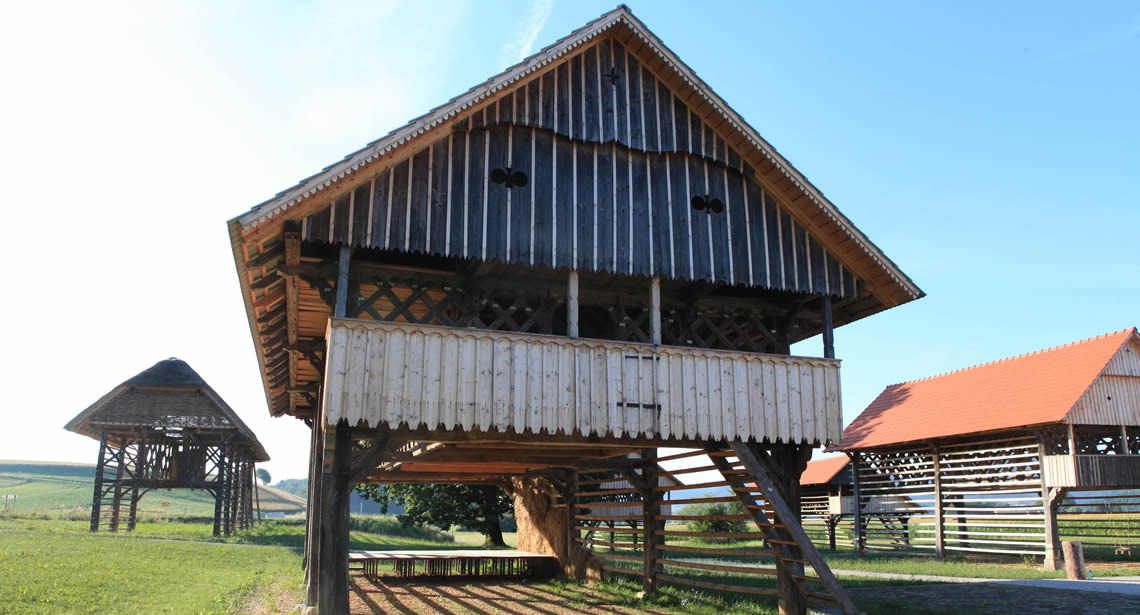 The Ziherle homestead was locally known as “at Peters’”, because all of the ancestors generations back were named Peter. It’s a large farm with some 15 ha of land and forest.

The wood for the kozolec (hayrack) from 1923 was brought to the location by the farmer’s daughter. The interviewee explains: “The father wasn’t at home when it was being set up. My Aunt, she brought the wood from the forest. I know, ‘cause the neighbours told me, it was because she was tall and strong and drove the horses like a master.” The toplar (double hayrack) boasts three pairs of “štanti” . The pillars are made of oak, the floors and steps are made of beech, and the rest is spruce wood. Aside from replacing the spruce wood doors and “rante” (cross members), no major reconstruction work was done on the kozolec.

The farm produced most all types of grain – barley at first, and later oats for the horses because the family worked as horse and cart drivers, with the recent addition of spelt. Ziherle’s toplar was also used for drying sheaves of wheat, buckwheat, and millet.

Agricultural machinery, sleds, and wagons were stored under the kozolec. It was insured against fires, though it was never struck by lightning. One of the customs was the hanging of evergreen garlands which were part of the Palm Sunday bundles on all of the buildings and structures on the homestead as protection against fire and lightning.

Sleeping on the kozolec was forbidden by the master, though when he did allow it, “he always checked if the person had cigarettes or matches on them”. Many festivities took place under Ziherle’s kozolec and sometimes “pušlšank”, occasional inn where the locals served homemade food and drink, was opened in it.

On and around the kozolec was a children’s paradise. They could play hide and seek, roll around in the hay, play traditional games, hang swings, and make balls and other toys.